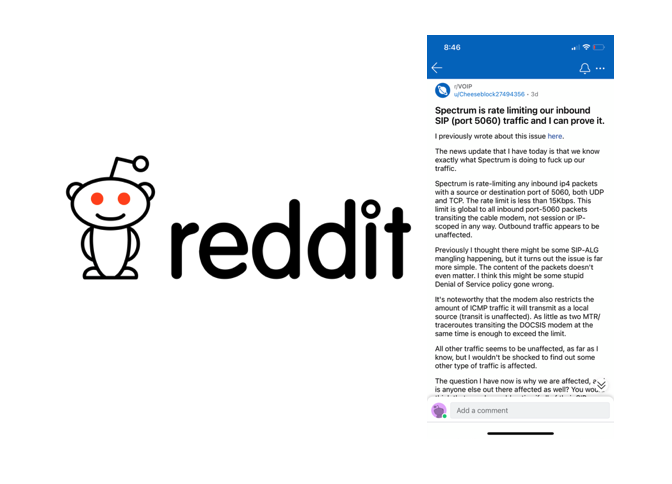 Network engineer and Reddittor Cheeseblock27494356 recently posted about problems he has encountered with VoIP quality of service when using Spectrum internet, and specifically DOCSIS modem models Sercomm ES2251 and Sagemcom RAC2V1S. The post was made on the VoIP subreddit – an online forum used by nearly 30,000 networking professionals to discuss problems related to VoIP.

He described his QoS problem as follows:

Spectrum broke everything the phones started failing registration and no calls were possible. Extensive testing shows I can get about 7 of our Yealink phones registered with the SIP server, as long as I stagger their initial connections. With less than 4 phones I can’t trigger the issue at all because there isn’t enough SIP traffic. Anything past 10 phones causes all of them to constantly lose their registration. The more phones, the more SIP traffic, and the worse the problem gets.

Unlike many posters on this forum however, Cheeseblock27494356 was not content to simply gripe about the problem. He went the extra mile to dig deep in search of the root cause. After performing extensive tests which he describes in detail, he concludes that:

Spectrum is rate-limiting any inbound ip4 packets with a source or destination port of 5060, both UDP and TCP. The rate limit is less than 15Kbps. This limit is global to all inbound port-5060 packets transiting the cable modem, not session or IP-scoped in any way. Outbound traffic appears to be unaffected.

The good news is that RabbitRun can solve this issue and many other network issues that affect quality of service. RabbitRun’s congestion-aware, dynamic QoS solution fixes these issues by encrypting VoIP (including SIP, webRTC and other realtime protocols) in a VPN tunnel and sending it to the network on a floating overlay that allows relevant packets to bypass SIP ALG, B2B UAs and other potentially harmful network element. And, it’s a plug-and-play solution that works behind NAT without the need for port-forwarding, reverse DNS or any other cumbersome network preparation.

More than that though, we also make voice failsafe with 4G LTE options included in every device. This means that customers can remain productive – with no-drop call failover – even if the primary internet connection goes down completely.